“One of the wittiest paintings in the show […] was Schiltkamp’s “Vanishing Point”, based on a 17th century pastoral landscape by Nicholas Poussin, in which a group of shepherds attempts to decipher an inscription on a stone tomb. In Schiltkamp’s painting, however, the figures in the classical grouping appear to inspect the picture plane itself, which already advances by virtue of a merging of Cezannesque paint handeling and Eastern esthetics to contradict the implied perspective of the Arcadian landscape that they inhabit. (Gallery & Studio review, New York, 2004)

‘Et in Arcadia Ego’
The pastoral landscape mentioned was painted in 1638 by the French Baroque painter, Nicolas Poussin (1594 – 1665). The inscription on the tomb is also the title: “Et in Arcadia Ego”. Literally this means “Even in Arcadia am I” and it is a reminder that even in idyllic Arcadia, there is Death. 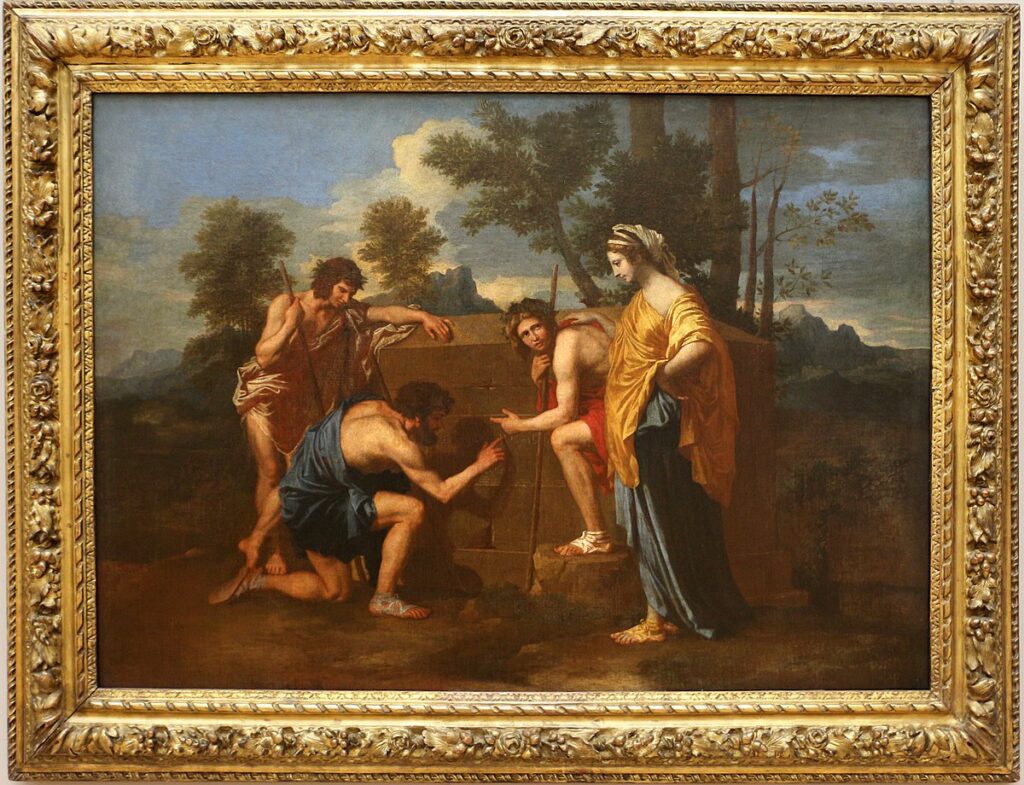 For years I was mesmerized by this painting every time I saw it, because of its ability to draw the viewer in. I wondered how Poussin had reached this effect. It felt as something that was beyond the depicted image, beyond the ’tableau’, as an abstract structure underneath the composition. I wanted to find out, and after some drafts I took out the tomb and made a study of the perspective. It appeared to me the horizon of the painting was on the line were the shepherds pointed at the inscription. Perspective lines drawn from the group of figures all crossed in one central point on this horizon. A vanishing point. And from there, I couldn’t resist painting my own response to Poussin’s work in 2003.

On my art education in this context:
When I applied for art academies in Amsterdam as a seventeen year old during my final year of high school in Curacao, I send in a map with drawings and artworks to the Rietveld academy as well as to the Rijksacademie van Beeldende Kunsten. While the Rijksacademie was my first choice and longing, I got accepted at the Rietveld and declined at the Rijks (their motif was my being too young.) I did a year at Rietveld and meanwhile rolled into the evening model-drawing classes at the Rijks. This way I build a map of drawings already initiated in the classical style of education the Rijks was known for. Now, to my great happiness, on my second application a year later, I was admitted as one of 10% to the preparatory first year. Imagine how impressive the former Rijksakademie was! – that is: before its conversion in the late 1980’s when teaching programs were abandoned in favour of individual studios for artists in residency.
The Rijksakademie was founded in 1870 by King Willem III and was the successor of the 19th century Royal Academy, the 18th century Stads Teekenacademie and the 17th century Konstkamer. For the first hundred years it served as a classical academy. In the past, artists such as Jan Toorop, Hendrik Berlage, George Breitner, Piet Mondriaan, Constant Nieuwenhuijs, Karel Appel and others were associated with the Rijksakademie
On entering the hall in 1978, you would encounter the huge Greek and Roman plaster casts, from sculpture groups of the Parthenon, and Donatello, Michelangelo and Canova (neoclassical) could be found in the corridors and class rooms. The Italian Renaissance was likewise flourishing at the painting department, Titian, Veronese, Tintoretto, Raphael… I was completely in classical heaven. These were the skills and qualities I identified with and was determined to learn. We were taught aesthetics, philosophy and art-historical frames of reference. The instructors in the noble art of sculpture and painting were called professors, they were mysterious creatures who would sometimes appear from their studio-caves, to comment on our doings. The educational program had academic status, comparable to university level. Officially I was enlisted at the painting department, but I was often studying and sketching with the sculptors. Classes by Paul Gregoire and Aart Schonk. Although the Rijksacademie was criticized later on for being too conservative and old fashioned, I am still enormously grateful for its severe academic program – the first year we were only allowed to draw in charcoal on paper! – it gave me basic skills, a ground from which I could develop myself as an artist.

On my fascination for Nicolas Poussin:
The legacy of classical antiquity and the Renaissance during my academy years may account for a series of ‘neoclassical’ paintings I made during the late 1990’s until 2003. These relatively large sized paintings emerged from my fascination with the French Baroque painter, Nicolas Poussin. Among Poussin’s paintings I studied, were the epic pieces at the National Gallery London – The Adoration of the Golden Calf” 1633; The Metropolitan Museum NYC – “The Abduction of the Sabine Women.” 1634; and at the Louvre in Paris – “Et in Arcadia Ego” 1638.
At the time of Poussin’s classicizing masterpieces, an aesthetic debate was going on in the art world between advocates of Poussin’s style, who said the drawing was the most important element of a painting, and those in favor of Rubens, who placed color above the outline drawing. This was a 17th century continuation of the fierce opposition between the Italian Renaissance cities Florence – disegno (drawing, design) – and Venice – colorito (not only color, but also the way color is applied) during the Renaissance.
Raphael, Michelangelo and Boticelli as Florentine painters therefore used drawing to study movement, anatomy and the natural world, and they prepared their compositions in detailed drawings before transferring them to the canvas. Then using pure colors to fill in the contours. (= Poussin)
Rather than beginning with careful drawings, Venetian painters as Titian, Tintoretto, and Veronese, on the contrary, often worked out compositions directly on the canvas, using layered patches of colored brushstrokes rather than line to define form. Venetian drawings show an interest in how light will affect a body and how color is indicated as subtle modulations of tone. (= Rubens)

All these notions of color and form attracted me, to find my own concept of space. I guess I was also in search for monumental settings, idealized landscapes with architectural structures and arranged groups of timeless figures. Treasures of a European cultural past come to life in a contemporary way. Poussin is a challenge for me, a painterly domain and archaic themes I can relate to.
Perhaps revealing what another soulmate wrote. Cézanne appreciated Poussin’s version of classicism: “Imagine how Poussin entirely redid nature, that is the classicism that I mean. What I don’t accept is the classicism that limits you. I want that a visit to a master will help me find myself. Every time I leave a Poussin, I know better who I am.” (Cézanne in 1907) 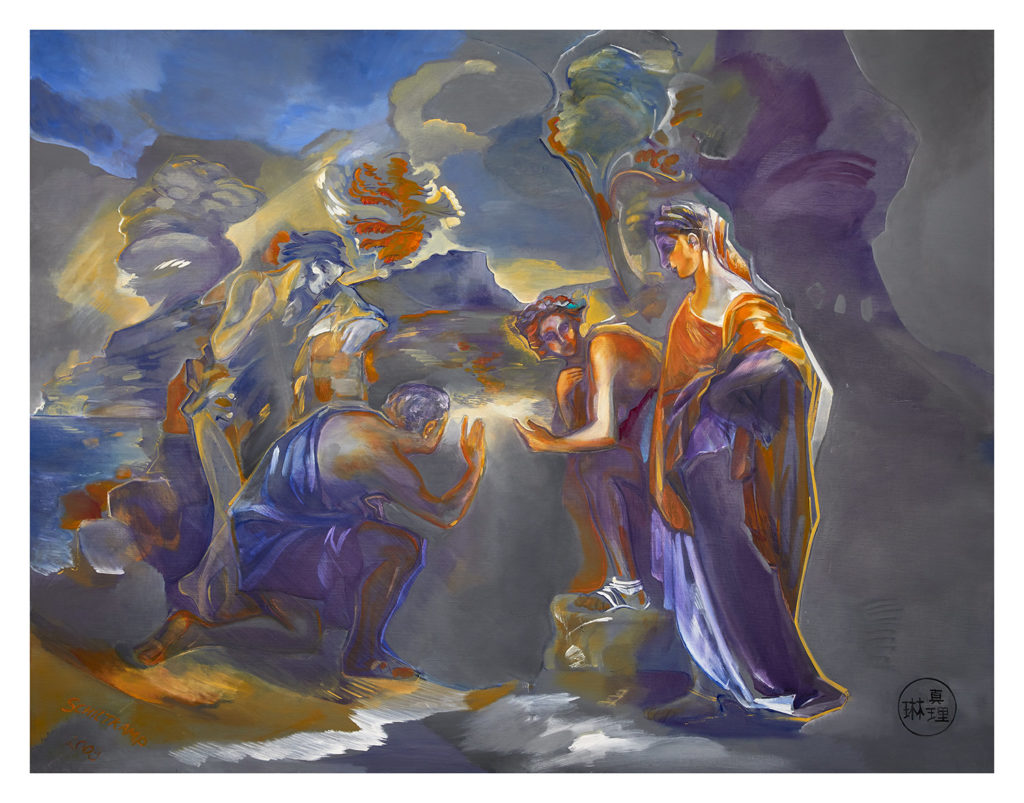